Recent moves in the FANG stocks shows that capital is starting to reposition within the global market.  As the end of the year approaches, expect more of this type of capital control to drive greater volatility within the markets.  At this time of year, especially after such a fantastic bullish run, it is not uncommon to see capital move out of high flying equities and into cash or other investments.

In early 2017, we authored an article about how capital works and always seeks out the best returns in any environment.  It was obvious from the moves this year that capital rushed into the US markets with the President Trump’s win and is now concerned that the end of the year may be cause to pull away from the current environment.

The current decline in the NQ, -2.25% so far, is not a huge decline in price yet.  Lower price support is found near the $6000 level.  Should this “Price Flight” continue in the NASDAQ, we could be looking at a 6~8% decline, or greater, going into the end of this year. 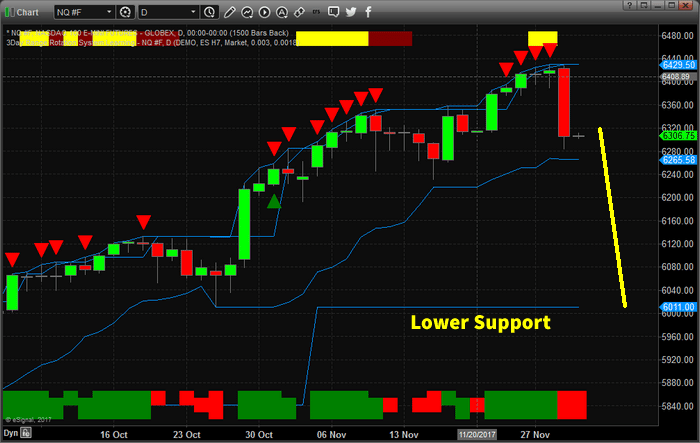 The price swing, this week, was very fast and aggressive.  In terms of capital, this was a massive price rotation away from Technology.  While the S&P and DOW Industrials continue higher, this presents a cause for concern with regards to the end of year expectations. 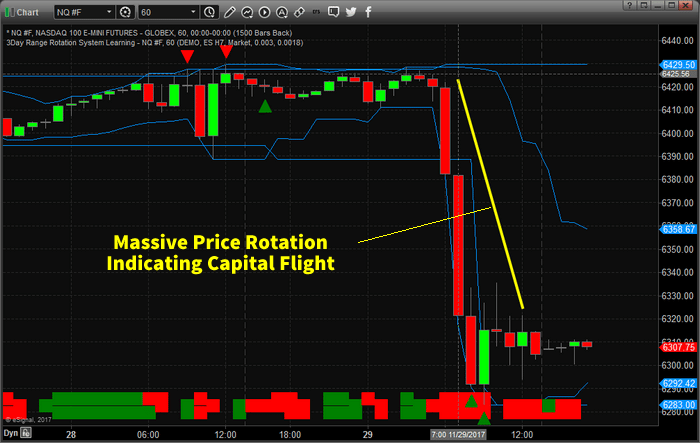 Will capital continue to rush into the US markets and specifically Technology stocks?  Or will capital rush out of these equities and into other sources of “safety” as technology melts down into the end of 2017?  Has the 40~60%+ price rally of 2017 been enough for investors to take their profits and run?

It is quite possible that capital will move to the sidelines through the end of this year and reenter the markets early next year as investors find a better footing for the markets.  The facts are, currently, that financials and transportation seem to be doing much better than the FANG stocks.  If this continues, we could be looking at a broader shift in the global markets – almost like a second technology bubble burst.

If you want to learn more about how we can assist you with your investment needs, visit www.TheTechnicalTraders.com to learn more.  Our researchers are dedicated to assisting you and in helping you learn to profit from these moves.  2018 is certain to be a dynamic trading year – so don’t miss out.