Thank you for following our multi-part research (Part I, Part II) into the possibility of a China/Asia market collapse and our hypothetical analysis of what that event might consist of and how it may play out.  So far, we have discussed the Chinese housing market rotation as well as the recent trends within the past 7+ years, expansion and foreign investments made by many Chinese and successful Asian investors.  All of this research raises some interesting questions for us to consider.

And finally, the BIG question:

What would it take for China/Asia to move from an investments/risk-taker mode to a protectionist/crisis mode?

One of the first things we need to consider is the expansion of credit that originated after the global market credit crisis (2008 to 2010) was still evident in China and Asia – although not quite as deep in form and structure as it was in the US, Canada, Europe and others.  Our previous research reports show that China’s property market and equities markets were not subject to the types of deep declines the US and other established economies experienced.  This was likely because China, at the time, was still experiencing a middle stage economic expansion period where China could continue to fund and export enough raw and finished materials to keep their economy running at 6%+ without much issue.  Of course, after 2015~2016, China was able to accomplish this by devaluing their currency, expending billions in reserves to build and product excess cities and finished material as well as foster and finance hundreds of large-scale projects throughout the globe (Africa, Europe, Asia, Mexico and South America).

In other words, the growth that China is experiencing is almost a shadow of the real growth because it has been enacted by shadow banking, shadow debt and leveraged expenses based on reserves while decreasing the Yuan valuation in order to maintain this economic shell game.  As long as their markets don’t contract more than a certain amount and investors are able to continue rolling their capital into this shadow banking system without any fear – nothing will likely change.  But when it does change, it should be very dramatic and quick.

Recent Chinese economic expansion has been partly a result of renewed global economic activity as well as the capacity of the Chinese government to use capital reserves to support their economic transition process – as evident by the $1 trillion in capital reserves that vanished between 2015 and 2017.

When one considers the recessionary economic cycles chart, above, as well as the US Presidential election cycle, one could explain this contraction as a general global contraction in relation to the uncertainty of a US election.  Yet, the size and scope of the capital reserve decline (over $1 trillion) within the scope of an expanding global economy, as well as expanded investment projects within China, means only one outcome could result in this reserve decline – reserves were used to support banking and finance facilities in an effort to avoid a collapse of credit/debt mechanisms.

These are tell-tale signs that the Chinese, and likely other Asian/Indian countries, are trapped in an expansive credit/debt environment that is likely very similar to what happened in the US/UK to set off the 2008~2010 global credit crisis.  The only difference this time is that it appears to be the Chinese have run themselves into this debt trap and the fragility of their economic footing is showing signs of cracking.

What would it take to cause the floor to crumble under the Chinese/Asian economies? 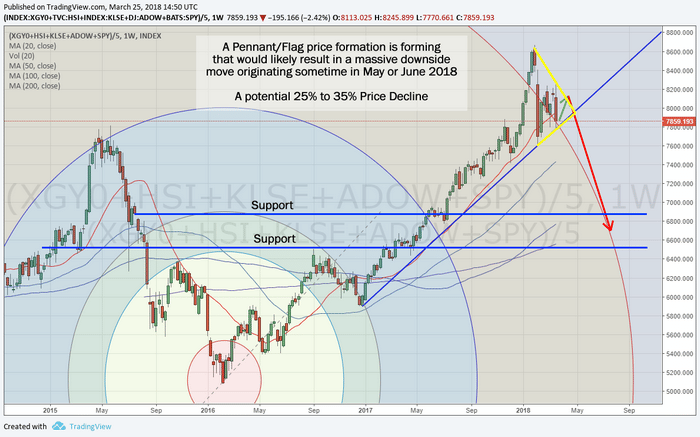 The next portion of this report will explain the magnitude of this potential move in very clear relative terms and explain why we believe all traders should be aware of this move as it is setting up.  We hope you are enjoying this research and the detail in which we are bringing this to you.

53 years experience in researching and trading makes analyzing the complex and ever-changing financial markets a natural process. We have a simple and highly effective way to provide our customers with the most convenient, accurate, and timely market forecasts available today. Our stock and ETF trading alerts are readily available through our exclusive membership service via email and SMS text. Our newsletter, Technical Trading Mastery book, and 3 Hour Trading Video Course are designed for both traders and investors. Also, some of our strategies have been fully automated for the ultimate trading experience.

Have These Articles Automatically
Posted on Your Website with RSS